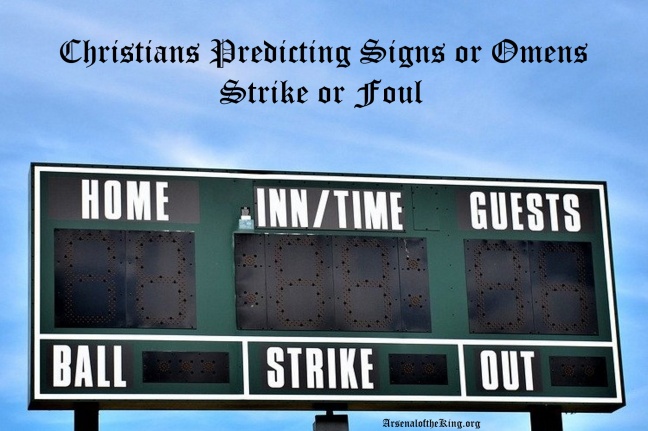 I have already seen a number of posts from self-named prophets that are taking signs from the ending scores of teams that played in the Super Bowl and using these numbers to predict what the Lord will do.

Brothers and sisters, I seem to remember several self-named prophets who did the same thing by using the scores of the world series before the midterm elections to predict the outcome of the election. These prophets used the scores of the Red Sox for the republicans and the score of the other team for the democrats. These prophets gave predictions by using the scores as an omen by using the numbers to predict that there would be a red wave [republican] sweep of the midterm elections. We all know how that turned out, it was a mix of red and blue with blue taking the majority in the house and their wins have resulted in many non-Christian bills being passed. Did the soothsayers cause conservatives to stay home and not vote with their false predictions of omens and a republican wave? We may never know.

I would like to remind my fellow Christians that said prophets, seers, or word givers wound up with egg on their face, whereas in the Old Testament, it would have been a stone. Using numbers to predict the outcome is described as reading omens, which is divination and predicting the future, practices such as these are forbidden for Christians to participate in (Deuteronomy 18). If that was not enough to put my fellow Christians off from listening to said soothsayers, in Isaiah 44:25-26 it tells the children of God that those who spout omens will fail, and those false words will make fools of the speakers. God will always confirm His word given through His child and thus the purpose of the speaker. As the many people who predicted a Republican sweep in the 2018 midterm elections were wrong so were the boasters in Isaiah wrong, and they became fools.

“25 Causing the omens of boasters to fail,
Making fools out of diviners,
Causing wise men to draw back
And turning their knowledge into foolishness,

26 Confirming the word of His servant
And performing the purpose of His messengers.
It is I who says of Jerusalem, ‘She shall be inhabited!’
And of the cities of Judah, ‘They shall be built.’
And I will raise up her ruins again.”

A sign or omen is when a person looks at numbers, events, objects, stones, cards, animals or the weather and then interprets these as signs, times, or omens by their own observations. Then the person makes an interpretative proclamation, word, or statement on those things they felt these meant, and thus predicts the future events, or what God is doing, saying or will do in the future. Is this not the same as what psychics or fortunetellers do with their omen predicting, reading signs, and all of these things are all related to practices of witchcraft, including divining, reading of bones, and fortune-telling.  These are prohibited in Scripture in 2 Kings 17:17, Leviticus 19:26-3, and Leviticus 20:6 to name a few verses. The following verses from Deuteronomy state that activities such as these are forbidden and if reading signs, omens, fortune-telling, divining and predicting are forbidden then why should Christians be participating in these activities?

“10 There shall not be found among you anyone who makes his son or his daughter pass through the fire, one who uses divination, one who practices witchcraft, or one who interprets omens, or a sorcerer, 11 or one who casts a spell, or a medium, or a spiritist, or one who calls up the dead. 12 For whoever does these things is detestable to the Lord; and because of these detestable things the Lord your God will drive them out before you. 13 You shall be blameless before the Lord your God. 14 For those nations, which you shall dispossess, listen to those who practice witchcraft and to diviners, but as for you, the Lord your God has not allowed you to do so.“

Where the Scripture uses signs would be where the Bible states that Israel would be a sign and a wonder, a miracle of God that the people would look, see, and marvel that the children of Israel were God’s miracle (Isaiah 8:18). There are no examples in Scripture of God’s people predicting omens, nor of reading numbers. When Bible talks about signs and wonders in the New Testament it was usually done in relation to miracles, such as the miracle where he talks about silver and gold have I none, what I have I give to you in the name of Jesus Christ of Nazareth rise up and walk. Or the sign when Paul was bitten by the adder, and he shook the snake off and lived. This miracle or wonder was used to confirm God’s power, so Paul was able to tell the gospel. Signs and wonders in the Bible were used to confirm Moses to the Pharaoh (Exodus 9) and in the New Testament they were used to confirm Jesus Christ and the Gospel. They were also used to confirm the people that moved in the gospel, the apostles, and the disciples. As in,

“18 For I will not presume to speak of anything except what Christ has accomplished through me, resulting in the obedience of the Gentiles by word and deed, 19 in the power of signs and wonders, in the power of the Spirit; so that from Jerusalem and round about as far as Illyricum I have fully preached the gospel of Christ.”

Interpreting the times goes against the Word of God where it says not to read the omens, not to read the signs and not predict the future as this is what diviners do. Strong’s talks about omens as enchantment, as divination, as signs, and these are not things that Christians are to do. It is condemned in the Bible let us look at the case of Simon, the sorcerer who did types of sorcery before he was a Christian, afterwards he went to the disciples, and he tried to buy the gifts of the Holy Spirit. Simon was told if he did not repent, he would die, and he begged for the disciples to pray for him. Simon feared for his life and repented. You will find the true account of this in Acts 8:9-24. Does the example of Simon not show us we are not to use these such practices? As we have seen in several places the Scripture is against the practices or rituals of reading omens, reading signs, or numbers, and please note we do not see these rituals used by the New Testament believers. The following is a small sampling from another article found on our website that further describes false words.

“Christians must not give heed or sample wares of false words or readings that individuals masquerading as prophets of God or spiritual advisors look to provide. Warriors of God must be aware that the words or readings given by lookalike Christians often have spiritual similarities to prophetic words, and alarmingly they are offered in many churches such as Bethel and online sites or social media, which is how they fool the innocent and naive (1). The words or readings that drip from their mouths are not based on Christ or the Word of God, and subsequently, they are not Biblical and thus akin to fortune-telling, reading omens, and other idolatrous practices, which are forbidden for the Christian.” https://arsenaloftheking.org/2019/09/28/prophetic-gift-or-the-enemies-trick/

Such practices are indeed condemned in the Old Testament and New Testament and if you would like more information on these subjects please visit our website. Brothers and sisters do not heed the warnings of those that are contrary to the Word of God. The Holy Spirit will never go against the Word of God, and as you have seen, God commanded in His Word for His people not to participate in such things; it is an abomination to the Lord. If it is directly against the Bible, do you think that these people are speaking the word of the Lord. Do not be tricked by the pleasant words of others; it is darkness masked as light. We are warned in Galatians 5:19-25 that,

“19 Now the deeds of the flesh are evident, which are: immorality, impurity, sensuality, 20 idolatry, sorcery, enmities, strife, jealousy, outbursts of anger, disputes, dissensions, factions, 21 envying, drunkenness, carousing, and things like these, of which I forewarn you, just as I have forewarned you, that those who practice such things will not inherit the kingdom of God. 22 But the fruit of the Spirit is love, joy, peace, patience, kindness, goodness, faithfulness, 23 gentleness, self-control; against such things there is no law. 24 Now those who belong to Christ Jesus have crucified the flesh with its passions and desires.

Please join me in prayer for the Lord to take down the divination/new age rituals, and practices that have entered our Church. Galatians 5:1 tells us that, “1 It was for freedom that Christ set us free; therefore keep standing firm and do not be subject again to a yoke of slavery.” I urge my fellow warriors to call out to  Almighty God, Who is and was and always will be. I pray that Christ will give His children discernment to see the light from the darkness, the wheat from the tares, that my brothers and sisters may be protected from evil, and walk in the light of the Truth, which is Christ Jesus, our Lord. Amen.